Ready to begin your journey?

Feel free to look around

WHAT’S INSIDE DULOCRACY IN AMERICA

“WE HAVE THEM NOW!” a smiling Franklin Delano Roosevelt told the Committee of Seven in January, 1937 after being informed that 22 million federal licenses to engage in interstate commerce had been issued to employees across the United States. For four long years Roosevelt and his Brain Trust worked diligently to achieve the president’s vision of an all-powerful centralized government. The seedling that was planted in America’s political soil in 1933 had taken root and this tree was finally starting to bear fruit. Roosevelt’s fruit of dulocracy was ripe and ready for the harvest.

THE ʺGREAT SECRETʺ THE LICENSE TO ENGAGE IN INTERSTATE COMMERCE The purpose of this chapter is to set forth as simply as possible the reasons for believing that a vital change in the relations of the federal government to local government and business has taken place since Roosevelt’s presidency, and that this change is based chiefly upon the construction put upon the commerce clause of the Constitution. This is not based on theory, but an accomplished fact; that with the sanction of the United States Supreme Court, the federal government regulates all business activity, whether local or national.

An equilibrium of balance within the federal government itself has not always been obtained in our national history, but it is correct to say that with the exception of a state of war, there never has been heretofore such vast concentration of congressionally delegated power in the office of the Chief Executive as existed under Roosevelt’s New Deal administration. In 1933, the justification for such a deposit of power was that the emergency nature of the times demanded it and that the Chief Executive himself, or his office, could with greater efficiency exercise or execute it. 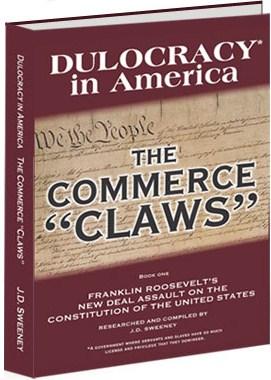 A must read for every American

A unique look at the commerce clause

A detaled description of
Roosevelt's assult on the commerce clause

Get your copy of Dulocracy in America – The Commerce “Claws”